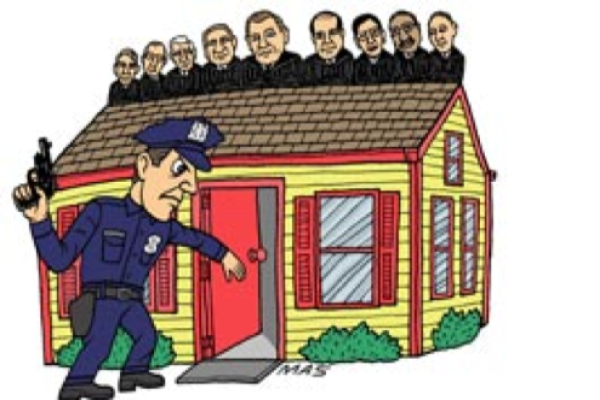 In terms of section 13(6) of the PSA a police official may search without a warrant any person, premises, other place, vehicle, vessel or aircraft or any receptacle, and seize any article that is found and may lawfully be seized.

The apparent aim of such a search is to exercise control over the illegal movement of people or goods across the borders of South Africa. The search may be conducted:

Section 13(7) of the PSA provides for searches in an area cordoned off for purposes of public order or safety.

The National or a Provincial Commissioner may, “where it is reasonable in the circumstances to restore public order or to ensure the safety of the public in a particular area”, authorize in writing that a particular area be cordoned off, specifying the period (which may not exceed 24 hours), the area and the object of the cordoning off.

On the strength of this authorization, a police official may, “where it is reasonably necessary” to achieve the objective of the authorization, conduct a search without a warrant (and presumably without reasonable grounds) of any person, premises, vehicle or receptacle or “any object of whatever nature” and seize any article that may afford evidence of the commission of an offence.

On the basis of such a broad purpose of the search, there may be substantial insufficient safeguards to achieve the necessary balance between the rights of citizens and law enforcement objectives.

Where it is reasonable in the circumstances in order to exercise a power or perform a function referred to in the Constitution, section 13(8)(a) of the PSA provides that the National or Provincial Commissioner may authorize a police official in writing to set up:

Section 13(8)(c) empowers a police official who is so authorized, to set up such a roadblock or checkpoint, as the case may be.

In terms of section 13(8)(g)(i) a police official who sets up such a roadblock or checkpoint may:

The police official must, on demand of any person whose rights are or have been affected by the search and seizure, exhibit a copy of the written authorization to hold the roadblock or checkpoint.

In Sithonga v Minister of Safety and Security 2008 (1) SACR 376 the court maintained that section 13(8) restricted the setting up of checkpoints in public places. However, the Act did not define what a public place was. It was further held that an authorization in terms of the Act must describe the place where the checkpoint was to be set up with sufficient particularity and thus not be vague and ambiguously framed.

Section 13(8)(d) of the PSA, provides that a police official may set up a roadblock for the purposes of seizing ‘certain articles’ without written authorization from the National or a Provincial Commissioner, if such a police official reasonably believes that:

In such circumstances a roadblock can be set up by such a police official on any public road or roads in that area in order to determine if a vehicle is in fact carrying such an object.

The requirement that a Commissioner may exercise this power only where it is “reasonable in the circumstances” imposes an objective test to be applied in law. The purpose of the roadblock should be reasonable.

A specified objective for the roadblock should be determined, the objective of which can be assessed.

A general crime prevention roadblock grants police officers unstructured search powers which are open to abuse and arbitrary, corrupt action, while a limited objective, such as the search for weapons or drugs, should result in focused and confined police actions which respect the rule of law and constitutional rights of citizens.

The legalization of cannabis use and possession in South Africa will undoubtedly bring all the above search and seizure laws into play.