FRUIT OF THE POISONOUS TREE & THE EXCLUSIONARY RULE 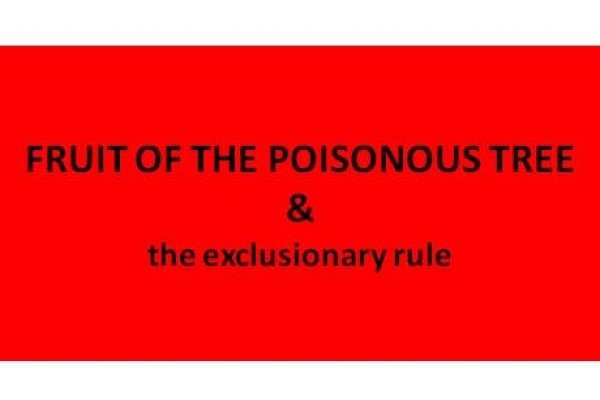 What is the meaning of “Fruit of the Poisonous Tree” in Criminal Proceedings?

Why is Section 35(5) a fundamental constitutional right in criminal law?

The “fruit of the poisonous tree” doctrine prohibits the State from admitting certain evidence into a criminal case after it has been tainted by a primary illegality. The doctrine is intended to prevent unlawfully acquired evidence from negatively impacting an accused person in a criminal proceeding.

It is a fundamental doctrine in any constitutional democracy as it essentially advocates that where an Accused’s right(s) has been infringed by the State such infringement(s) cannot be used by the State against the accused to prove the Accused’s guilt. Allowing this doctrine to be diluted or not to be upheld in every criminal proceeding, amounts to a mockery of the criminal law and indeed the rule of law which underpins any constitutional democracy.

The “fruit of the poisonous tree” doctrine is an extension of the exclusionary rule found in constitutional democracies around the world.

“Evidence obtained in a manner that violates any right in the Bill of Rights must be excluded if the admission of that evidence would render the trial unfair or otherwise be detrimental to the administration of justice”.

Section 35(5) is augmented by sections 38 and 39 of the Constitution which provide that:

“38. Enforcement of rights
Anyone listed in this section has the right to approach a competent court, alleging that a right in the Bill of Rights has been infringed or threatened, and the court may grant appropriate relief, including a declaration of rights. The persons who may approach a court are –

When interpreting the Bill of Rights, a court, tribunal or forum ¬

When interpreting any legislation, and when developing the common law or customary law, every court, tribunal or forum must promote the spirit, purport and objects of the Bill of Rights.

The Bill of Rights does not deny the existence of any other rights or freedoms that are recognised or conferred by common law, customary law or legislation, to the extent that they are consistent with the Bill.”

Before the exclusionary rule came into being in South Africa, there was no particular concern for the way in which evidence was obtained by the South African government and it’s agents prior to freedom being obtained in 1994. As a general rule, ‘relevant evidence’ was admissible. This approach was followed because South African courts were required to refer to the English common law in force on 30 May 1961 with regard to the admissibility of unlawfully obtained evidence.

It is submitted that the undoubted influence of foreign law decisions in this regard will be increasingly important to South African courts when consideration of the exclusionary rule occurs. This is because the foreign law decisions have immense legal authority underpinning same due to the length of time of the foreign constitutional democracies and their case law authorities and the various legal challenges considered over the decades in countries such as the USA, UK, Canada, Germany, France and other constitutional democracies. This is not only in regard to crimes such as drug possession, drug use, drug trafficking, organised crime and racketeering but also in regard to white-collar crimes, and various common law crimes such as murder, assault, arson, manslaughter or culpable homicide, fraud, theft and armed robbery.

Undoubtedly, the legalization of cannabis use and possession of same in South Africa will obviously bring the exclusionary rule and the fruit of the poisonous tree doctrine to the fore in criminal legal proceedings.

The purpose behind this “fruit of the poisonous tree” doctrine is to deter police and/or State misconduct in its actions using State power against it’s citizens. It is an indispensable principle of criminal law in all constitutional democracies.

Metaphorically, the original unlawful evidence obtained is considered to be the poisonous tree, and any evidence that stems from or flows from this tree is similarly tainted by the poison.

This doctrine is applied in many factual scenarios pertaining to police or law enforcement conduct, not only in regard to search and seizures but also in regard to inter alia, the planting of evidence at crime scenes, drug busts, road traffic stops, white-collar crimes.

Application of the exclusionary rule

The fruit of the poisonous tree doctrine applies to all evidence illegally obtained whether it is physical evidence, oral evidence or testimony in court or on declaration or affidavit, real evidence or documentary evidence. It also applies to evidence acquired directly from the illegal conduct or indirectly from it with certain exceptions noted below.

Invariably, the most common reason why this doctrine is applied is through a defence application on behalf of an Accused to exclude evidence, that would adversely affect the Accused’s case, which derived from an unlawful law enforcement search, seizure or illegal police conduct.

The United States Supreme Court has decided a number of cases related to this doctrine. In the case of United States v. Rey, it was stated that for the exclusion of evidence to be ordered, the police misconduct must have been “sufficiently deliberate” that future similar conduct would be deterred due to the exclusion and that such future deterrence would be worth the cost to the justice system.

The doctrine is designed to deter police misconduct that is reckless, deliberate or grossly negligent. However, it can also be used to correct widespread State systemic negligence. The doctrine may not prevent all types of evidence from being admitted if it would only cause marginal deterrence.

In South African law, relevant cases which have considered and adjudicated upon the exclusionary rule directly and indirectly in terms of section 35(5) of the Bill of Rights  provide interesting insight. (rf the approach followed by Chaskalson P in S v Makwanyane 1995 2 SACR 1 (CC) dealing with the constitutionality of the death penalty. See also S v Melani 1996 2 BCLR 174 (EC) 352, where Froneman J concluded that: “It is true that courts should hold themselves accountable to the public, but that does not mean that they should seek public popularity”; Pillay v S 2004 2 BCLR 158 (SCA); Thint (Pty) Ltd v National Director of Public Prosecutions;  Zuma v National Director of Public Prosecutions 2008 ZACC 13; S v Matlou 2010 2 SACR 342 (SCA). See also:

S v Nell 2009 2 SACR 37 (C); S v Matlou 2010 2 SACR 342 (SCA); S v Dos Santos 2010 2 SACR 382 (SCA); S v Lachman 2010 2 SACR 52 (SCA); S v Mkhize 2011 1 SACR 554 (KZD). For an analogous approach by the Supreme Court of Appeal, see S v Matlou 2010 2 SACR 342 (SCA) para 31. The accused in Matlou was assaulted by the police with the aim of obtaining self-incriminating evidence against him. Additionally, his right to legal representation and his right to remain silent were infringed. After a discoverability analysis the court held that the admission of the disputed evidence would not only render his trial unfair, but its admission would also be detrimental to the administration of justice. As a result, real evidence, essential for convictions on serious charges (and which linked the accused to such charges) was excluded. Compare S v Lachman 2010 2 SACR 52 (SCA), where a discoverability analysis resulted in the admission of the disputed evidence.
See also:

S v Basson 2007 1 SACR 566 (CC) where the Constitutional Court dismissed an application based on the contention that the issue of the admissibility of bail proceedings should not have been heard before the accused had been called upon to plead.

However, compare the approach followed in S v Mkhize 2011 1 SACR 554 (KZD) para 51, where Govindasamy AJ applied an approach based on the “automatic” exclusion of unconstitutionally obtained evidence when he reasoned as follows: “I am in agreement with the learned Patel J in Viljoen‘s case: there is no discretion afforded to a judicial officer when he/she is confronted with a situation where evidence is obtained unconstitutionally. To admit such evidence, contaminated as it is, will be a violation of the accused’s rights, and, above all, will be prejudicial to the administration of justice.”)

Even if evidence was originally discovered by an unlawful search, the evidence can still be admitted in some cases. This can occur when the same evidence is obtained in an independent manner that was not tainted by the primary illegality.

For example, in one case, an officer entered a home illegally without a valid search warrant. An application for a search warrant was later obtained that was based on factual information that did not rely on the officer’s illegal entry. Evidence was seized from the home. The court ruled that the evidence did not need to be excluded, despite the illegal search.

The independent source doctrine is not affected by the public policy concerns of the fruit of the poisonous tree doctrine. For example, courts are not concerned with deterring future misconduct when the evidence is independently acquired without relation to the evidence being tainted. Instead, this doctrine allows police to return to the same position as they would have been had there never been any illegal taint.

One more exception to the fruit of the poisonous tree doctrine is inevitable discovery.

This exception does not require the exclusion of the illegally-obtained evidence if it was inevitable that it would have eventually been discovered by law enforcement. This means that the police would have found the evidence even without the illegal search been conducted illegally or unlawfully.

A further exception to the exclusionary rule itself is good faith. If the court finds that a police or law enforcement officer believed in good faith, that a search was legal, the court may not exclude the evidence in the criminal trial. There are guiding principles in this regard.

As aforementioned, the legalization of cannabis use and possession of same in South Africa will obviously bring the section 35(5) of the Bill of Rights, the exclusionary rule and the fruit of the poisonous tree doctrine to the fore in criminal legal proceedings. It is inevitable.

Put another way, either evidence is legally obtained or it is not. Fostering of grey areas in the law cannot be of any use to the proper and just administration of justice in the public interest.

It is critical to note and accept that the constitutional rights entrenched in the Bill of Rights are rights which many people have bled and died for over the years of human rights abuses and atrocities committed in South Africa.

Has the time not come to implement punitive damages in South African law to give effect to the rights which so many people have bled and died for?